Report on a charity concert - "Prayer"

On the 11th of March, 2019, the very day just eight years since the Big East Japan Earthquake, a charity concert titled "Prayer" was held at Hamarikyu Asahi Hall.

Starting with Mrs. Kimiko Nakazawa's Ave Maria, sounding out of her heart softly but solemnly praying for the deceased, the first half program was played with TSUNAMI instruments: TSUNAMI violin and viola by Mr. Yuji Goto and TSUNAMI cello by Mr. Seiichi Chujo, and a Chinese traditional instrument, called niko, by Mr. Rakugun Bu, who drew the picture of Kiseki-no-Ipponmatsu (a pine tree of miracle) on the back of TSUNAMI violins.
The second half program consisted of narration of "Ame-nimo-makezu" (I don't care even under a cold rain) (a famous phrase from a poem) by Mr. Sohoku Sai, and vocal performances by Ms. Masumi Nemoto and Mr. Cariola Guido (a special guest) that filled the hall with rich fascinating sound.
All of the soloists were accompanied by an amicable and reliable pianist, Ms. Yukari Arai.
The encore was "Kawa-no-Nagare-no-Yoni" (Like a Flow of a River) (a Japanese popular song) played by all the performers. 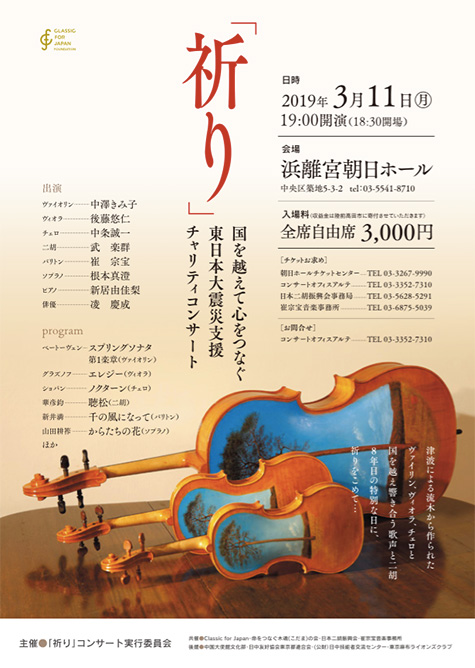 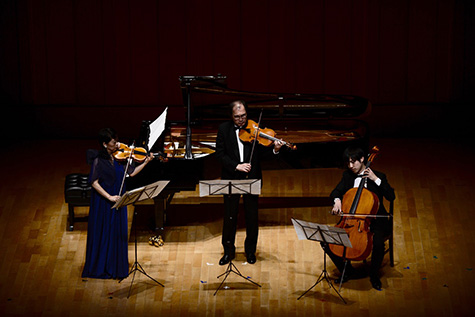 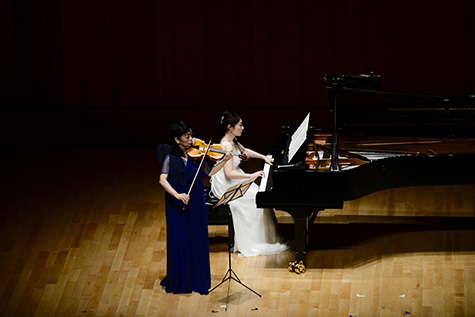