That is a violin made of driftwood that was caused by the tsunami just after the Great East Japan Earthquake.

After the disaster, piles of driftwood covered the land of the disaster areas.
Day after day media called them “piles of debris.”

However, the driftwood was never just “debris.”

They were the trees that grew up in the disaster areas and existed with people living there for years and generations.
It was wood that was used at an alcove post or as beams of a house, and was a heartwarming existence for a family.
Every piece of the wood has its own history and memories.

If beams of demolished houses or driftwood are given a life again as a violin, memories and  spirits of homeland Tohoku embraced in such wood may be communicated from people to  people, and from generation to generation.
With such a view and hope, a violin maker, Mr. Muneyuki Nakazawa made a violin from this rare and unique wood.

Wishing that the violin would be the banner for revitalization of the disaster areas, a piece of  wood from “Kiseki no Ipponmatsu (a pine tree of a miracle)” is used as the sound post, and the figure of the miracle tree is drawn on the back of the violin.

However much time may go by, we should be in awe of nature and should never forget the  Great East Japan Earthquake.
We deeply wish that people would gather where TSUNAMI Violin sounds and music can be  heard and that it could be an opportunity where they would strengthen a tie between the heart and the heart of the community and families. Furthermore, we wish, in the process of this violin relay, at every step where this violin is handed over from player to player, the relationship to unite the whole country of Japan would be deepened.

Four violins, two violas and two cellos have been made so far, and they are telling stories of the victims all over the world.

From the Start to the Completion of TSUNAMI Violin Making, and its Performance Relay

Guided by Mr. Hinata, they went and looked around the Ipponmatsu and piles of debris and  driftwood, picking out pine wood and evergreen oak that seemed to have been used for houses, cutting them, bringing back an appropriate amount to make two violins, having the remaining wood stored in Mr. Hinata’s lumbermill.

As to the materials of TSUNAMI Violins, the top plate is made of “pine wood” and the ribs and the back are made of “hard wood that is very similar to maple.”

The materials were roughly planed by Dec 31st, 2011. The violins were formed in the condition of plain wood by the middle of February, 2012. Then the sound adjustment and varnishing were started. It was just at the time of their completion that the violins reached their usable condition and fame when Mr. Ivry Gitlis played one of the violins for prayer at the memorial service in Rikuzentakata City on Mar 11th, 2012.

On the back of the violin, Mr. Wu Lequn, a Chinese string instrument Niko player and artist and an old friend of Mr. Nakazawa, drew a picture on the motif of “Kiseki no Ipponmatsu” with a hope for revitalization of the disaster areas. Every time the picture fades after performances, he draws it again, keeping the picture as the symbol of TSUNAMI instruments.
Four violins, two violas, two cellos and one fractional size violin have been made so far.

As of March 2017, over 500 performers have played the instruments, and the performance relay is going on with musicians across countries.

※ Please note that various incorrect names like “Earthquake Disaster Violin” or “Driftwood Violin” have been spread out on the Internet. Officially, the correct name is “TSUNAMI VIOLIN.” 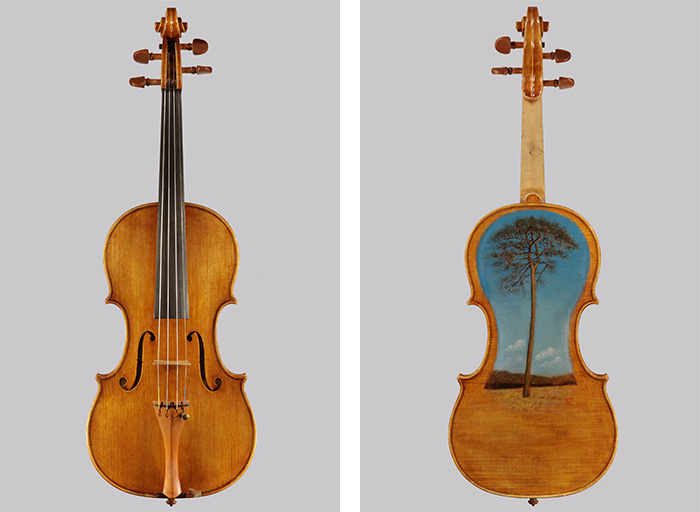 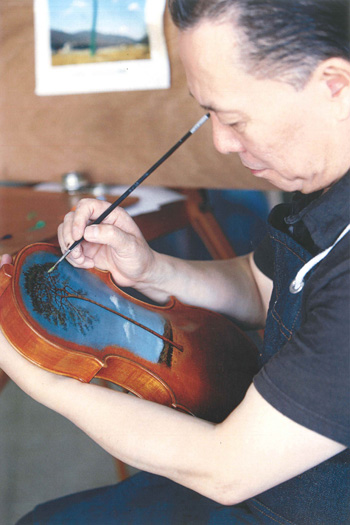